International-standard, luxury ger camps, run with sustainability in mind, present perhaps the most exciting opportunity for future development in the Mongolian hospitality industry.

Cultural, community and heritage tourism is reportedly the biggest tourism segment- by a large margin. A 2009 OECD report noted this type of tourism accounted for almost 40% of global tourism in 2007. In 2016 an Allied Market Research report found travellers are now open to exploring new destinations to “gain deeper experience and absorb new cultures”. Mongolia’s countryside provides unparalleled opportunities for such cultural immersion. As such, the hospitality industry in the countryside presents perhaps the brightest prospect for future development. The country benefits from a varied landscape—from the Gobi Desert in the south to vast forested areas across the northwest. In fact, Mongolia’s large network of protected areas covers 17.4% of the country.

Further, combining the great outdoors, wildlife and luxury has become a global trend in the hospitality industry in recent years. An Allied Market Research study predicted the luxury sector would be the fastest growing segment of the travel industry worldwide in the 2016-22 period, with the market projected to garner $1,154 billion by 2022.  An upward swing in demand for luxury travel from the Chinese and Indian market was also noted, as Asia-Pacific millionaires now control more wealth than their North American counterparts.

The Mongolian tourism industry is seasonal in the extreme; with numbers rising in the warm summer months of June-August, and dropping off completely in the winter months. The provincial hospitality industry in Mongolia is even more seasonal than that of Ulaanbaatar, which can count on a constant influx of business people even throughout the winter months. Even hotel capacity in Ulaanbaatar can fall below 30% during winter. An analysis of statistics for the quarterly income, by aimag, of hotels shows that highest revenue occurs in Q3 and Q4 of each year across the country. Due to this seasonality, ger camps are arguably ideal, as they can be easily shut down for the winter. Additionally, ger camps tap into the ‘authenticity’ and ‘cultural immersion’ trends in tourism as there is an enormous market for ‘travel products outside of mainstream offerings’.

As of 2012 there were 300 ger camps across the whole of Mongolia, with 25% rated by quality standards—and only a very small number meeting international luxury standards. These ger camps may be divided into two categories:- tourist ger camps, and luxury ger camps. The former predominates the market, and is the main type of accommodation visitors experience when touring the countryside. Currently approximately 50 tourist ger camps are available for booking online via the online platform mongoliagercamps.net 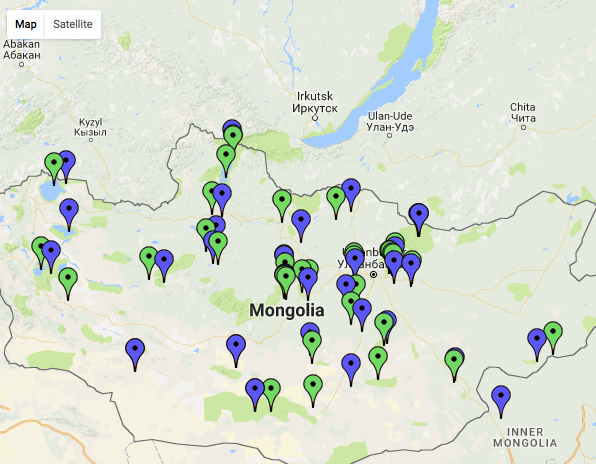 Small numbers of luxury ger camps have sprung up in recent years, leveraging the country’s natural assets and tourists’ desire for a luxurious, once-in- a-lifetime experience. Two examples of which are the Mongke Tengri Camp and the Three Camels Lodge. The Mongke Tengri Camp, located in the Orkhon National Park, close to the ancient city of Kharkhorin, has been featured in the Condé Nast Traveller and charges guests more than $500 a night.

The Three Camels Lodge based in Dalanzadgad, in the Gobi, meanwhile, has partnered with luxury travel providers such as National Geographic Lodges and Abercrombie&amp;Kent. The Lodge offers 40 individual gers, each with their own personal bathroom and decorated in the Mongolian style. The gers themselves are traditional, felt-clad, wooden-slatted structures. Mongolian felt slippers and bathrobes are among the locally influenced in-room amenities. The lodge also offers guests luxury features such as a spa.  For two nights at double occupancy with the “Essential Gobi: Three Days” package it’s $1870
in May, September and October and $2,020 for June, July and August.

Travellers are beginning to become more conscious of the environment, and how their travel impacts it. 2017 is the International Year of Sustainable Tourism for Development—demonstrating the world’s commitment to sustainability as the future for tourism. One small indication of this increased awareness is that between 2014 and 2015 the percentage of consumers willing to pay more for brands that were sustainable and committed to environment and social values rose from 55% to 66%.  The Three Camels Lodge was established with sustainability in mind and was awarded World’s Best Ecolodge at the 2013 National Geographic Traveler awards. Its CEO Jalsa Urubshurow, has said: “The concept of the Three Camel Lodge began as the keen desire to preserve and protect the Gobi Desert by creating a property that enabled controlled tourism to bolster the local community”. Engaging with eco-tourism may also help the hotel increase revenue, whilst aiding the wider community. The Three Camel Lodge, for example, has trained farmers in organic agriculture techniques, reducing the amount of food being imported into the area and supporting local livelihoods. Involving the local community in the running of a hotel, may also help cement the hotel industry with the economy of certain areas, ensuring its longevity.

Bhutan— an example of luxury, sustainable tourism in rural areas

Bhutan represents an intriguing example for Mongolia of how the development of a luxury tourism industry can precede infrastructural perfection. Currently the country has only one main highway, no railway network. The only way for tourists to travel between valleys is to brave treacherous, winding tracks. The Aman hotel group’s offering in Bhutan—Amankora—is particularly interesting. The hotel group has spread its accommodation across five lodges dotted around the country, comprising 72 suites in total. This allows the traveller to experience an Aman level of luxury, as well as traditional Bhutanese customs in intimate settings, as they journey throughout Bhutan. It is highly possible that a similar model may work in Mongolia, which possesses its own share of stunning scenery, flora and fauna, and historic attractions of worldwide importance. Indeed, the majority of tourists to Mongolia already opt for guided tours when leaving Ulaanbaatar.

At APIP, we’re readying ourselves for a very busy summer 2018. We’ve now completed the Olympic, continue presales on the Circus, and have a series of consultancy instructions. If you want to hear more about our services, why not book a meeting with one of our team?