Mongolia: A Case Study in the Complexities of Gender Parity

Gender parity is often portrayed as a very "black and white" issue—it either exists or it doesn't. Most societies, however implicitly, tend to be very geared toward males, with the reality of gender parity a mere ghost of what could be. Societal norms reflect this in various facets, such as literacy rates and employment. Mongolia is a unique case study when it comes to analyzing gender parity theory in practice.

While issues of gender parity are noticeable around the globe, Mongolia's situation is notably different. In many nations, literacy corresponds quite closely to employability and often, status within society. Around the world, when it comes to women, literacy rates are often quite low as compared to those of men. In these nations, women often stay home and raise children or take care of household duties, often achieving little to no education as a result. 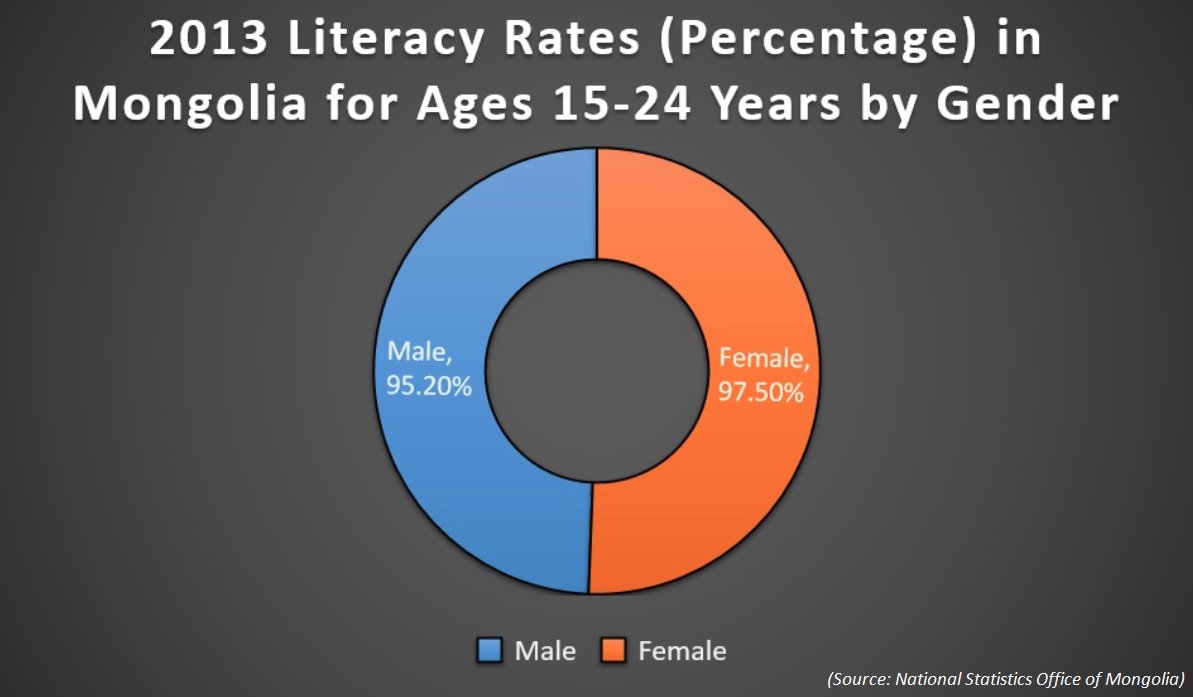 As of 2017, per the National Statistics Office of Mongolia, in Mongolia, the adult male and female demographics both have a close to 100 percent literacy rate. However, women actually having higher levels of further education, such as university education, overall. In fact, women make up the majority of university students. 2018 National Statistics Office of Mongolia data also indicates that women have a lower unemployment rate than men do, at 7.1 percent, as compared to men, of which roughly 8.3 percent are unemployed. What’s more,  this same source indicates that as per 2018, 63.7 percent of men were employed, compared to 49.6 percent of women. What’s interesting about this is that while male employment rates have remained relatively stable, hovering in the low to mid 60 percents since 1997, the female employment rates have appeared to decrease dramatically from 60.9 percent in 1996.

Mongolia was ranked third in Asia, by the World Economic Forum, in regard to gender equality, as of 2018. Education, especially, is encouraged not only via political policies but on the home front as well. Some believe that this encouragement for an endeavor such as education, outside the home, is because women are not needed at home for labor-based work as men often are.

If this, in fact, is the case, can one claim that women are receiving comparably favorable treatment in society? No. One cannot because while there are some unique aspects to the disparity which many refer to as the “reverse gender gap,” often referring to women’s higher levels of education, this term fails to take into consideration a number of aspects, namely, the comparably lower women’s labor force participation rates—a fact which appears to some extent to negate their higher levels of education.

Additionally, when considering business and employment, women often take the back seat and are not often found in management roles. However, as per the National Statistics Office of Mongolia, this percentage has been increasing, with the proportion rising from 37.8 percent in 2015 to 40 percent in 2017. 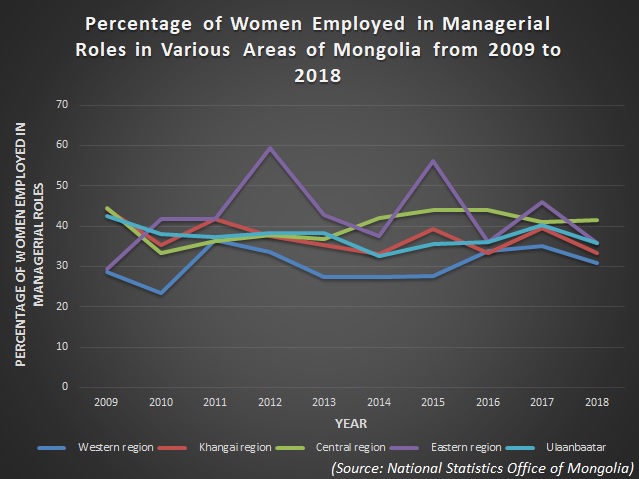 However, relatedly, when the percentage of women employed in managerial roles was analyzed by region, it is noticeable that there appears to be a bit more of a downward trend in Ulaanbaatar as compared to other regions of Mongolia.

Some ascribe the low previous numbers to cultural gender norms. Traditionally a culture where women are empowered to take on a lot of work, in Mongolia, women often still do, frequently raising children alongside their work or sometimes, despite their high levels of education, in place of employment.

It should be noted that the Mongolian government is striving to attain equality for women. The 2011 Law on Promotion of Gender Equality is only one example of this. Provisions mentioned in the law include gender-based political and civil service representation quotas, equal rights and opportunities for women within a marriage, equal pay and non-gender-based discriminatory hiring policies, equal education opportunities and discontinuation of education materials that actively oppose such values, etc.

However, as is the case in many countries with such policies, in Mongolia, these policies are not always apparent in practice. The glass-ceiling is often fairly hard to shatter entirely, with shards seeming to cause problems in various facets of life for women, regardless of provisions hoping otherwise. Despite the “reverse gender gap” and governmental policies striving for women’s equality, unfortunately, the inequalities still exist. As of 2018, out of 149 countries, Mongolia ranked 58th, with a score of .714 on the Gender Gap Index.