Landlocked in Central Asia, Mongolia sits at a geopolitical crossroads. With Russia to north and China to the south, it must find a way to take advantage of its resource wealth and strategic location without sacrificing economic independence to its bigger neighbours.

The current administration has adopted a multi-vectored foreign policy. Relations with Russia and China clearly sit atop the agenda. However, Mongolian government is careful to ensure that the country is not overly dependant on Moscow and Beijing, and has been keen to strengthen ties with other regional players such as the US, Japan and South Korea.

The Sino-Mongolian relationship is critical to Mongolia’s economic development, but have proved a highly divisive issue internally. China is the main buyer of Mongolian mineral exports, with over 85% of the country’s exports going across its southern border in 2017. Xi Jinping’s ‘One Belt, One Road’ (OBOR) initiative offers a means of improving infrastructure between its two main trading partners, as Beijing extends considerable funding to Mongolia to build a ‘trilateral economic corridor’ between Tianjin, Ulaanbaatar and Irkutsk. As of July 2017, China had already invested $4.1bn in the country.

However, closer ties to Beijing are a hard-sell politically. Many ordinary Mongolians view Chinese influence with suspicion. Anti-Chinese sentiment has been mobilised by politicians as part of a wider resource nationalist narrative. Despite economic imperatives, China’s financial clout is seen by some as a poison chalice, which they fear to tie Mongolia into Xi’s vision for regional hegemony. As a result, this relationship presents both an economic opportunity and a political liability for Mongolian policymakers.

Pivot to the Pacific:

Relations with China were a defining issue in the 2017's presidential election. Battulga railed against Chinese “threats”, and sought portray himself as a friend of Russia, and of Putin personally. However, Moscow does not offer an alternative to the sweeping largesse of the China’s OBOR initiative, or a counterweight to Mongolia’s reliance on trade with China. Indeed, Russia is actually part of the country’s trade dependence problem. Mongolia imports 98% of its processed hydrocarbon needs with almost all of the country’s crude oil coming across its northern border.

For all the heat and rhetoric of the campaign trail, Battulga has been notably pragmatic in his foreign policy agenda. One part of this has taken the form of a sober acceptance of the reality of China’s regional dominance, and a recognition that a good relationship is a necessary condition of Mongolia’s economic success. The other has seen a concerted effort to court with other regional players such as Japan, South Korea and the US. 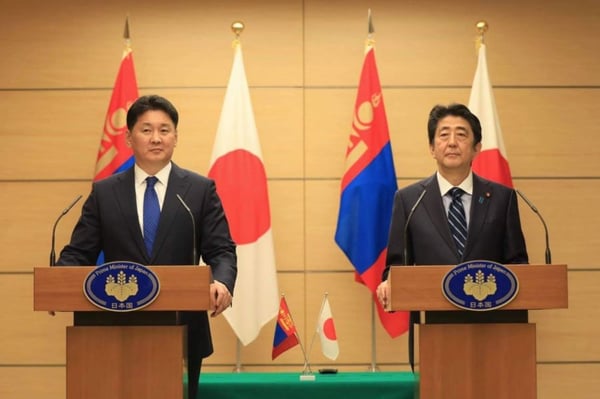 In September, PM Ukhnaa Khurelsukh met with Vice President Mike Pence and Secretary of State Mark Pompeo in Washington, signing an agreement with the Millenium Challenge Corporation to receive $350m in aid to improve Ulaanbaatar’s water supply. Similarly, the Prime Minister’s December 2018 trip to Japan marked the continuation of cooperation between Mongolia and Japan.

Japan has already provided $493 million loan for the construction of Ulaanbaatar’s new international airport, as well as establishing an Economic Partnership Agreement (think FTA-lite) in 2016. The December meeting with Shinzo Abe affirmed further economic cooperation in the future. South Korea, which has been a major source of foreign investment in Mongolia in recent years, is currently in discussions with the administration over relaxing visa restrictions between the two countries.

The upshot of the China dilemma is that Mongolia has been pushed to look beyond its immediate borders to develop its extractive industry whilst limiting its dependence on its two neighbours. These relationships are important because they can assist Mongolia in diversifying its economy away from mineral exports by providing financial assistance for vital infrastructure projects and by developing alternative trade partners that will reduce its exposure to fluctuations in the Chinese economy. As 2019 approaches, Ulaanbaatar’s business community anticipates further progress in these important relationships.