At first glance, the coal rich lands of Mongolia might not seem to be a natural home to a renewables revolution. Yet, despite the country's economic reliance on its vast coal fields, or perhaps because of it, the Government of Mongolia is aggressively pursuing clean energy sources.

"The right to a healthy and safe environment, and to be protected against environmental pollution and ecological imbalance" Constitution of Mongolia Chapter 2 Article 16 Section 2

Since its inception, Mongolia has placed high importance on protecting the health of its citizens and environment. Environmental protections appear multiple times in the Mongolian Constitution, with the government going as far as to say that, "It is a sacred duty for every citizen to ... protect nature and the environment." The Constitution shares this burden with the government, giving the Cabinet the responsibility to "undertake measures for protection of the environment [and] the sustainable use and restoration of natural resources." With a constitutional duty to protect the environment and pressured towards action by the growing carbon emissions problem in the capital, the Government of Mongolia has teamed up with international financial organizations to bring clean energy to the country.

Land of the Eternal Blue Sky

Nicknamed "The Land of Eternal Blue Sky," Mongolia's climate makes it a prime location for solar power generation, especially in the South Gobi region. Across the country, the number of sunny days averages 270 to 300 days per year, equivalent to 2,250 to 3,300 sunshine hours. Nationwide, average annual solar radiation is estimated to be between 1,200 and 1,600 kilo-Watts (kW) per square meter, with some regions receiving nearly 2,000 kW per square meter. According to a 2014 joint study by the US National Renewable Energy Laboratory and the Mongolian National Renewable Energy Centre,  Mongolia has the potential to generate 1500 Giga-Watts of solar energy, equivalent to approximately 15% of total global electricity demand. 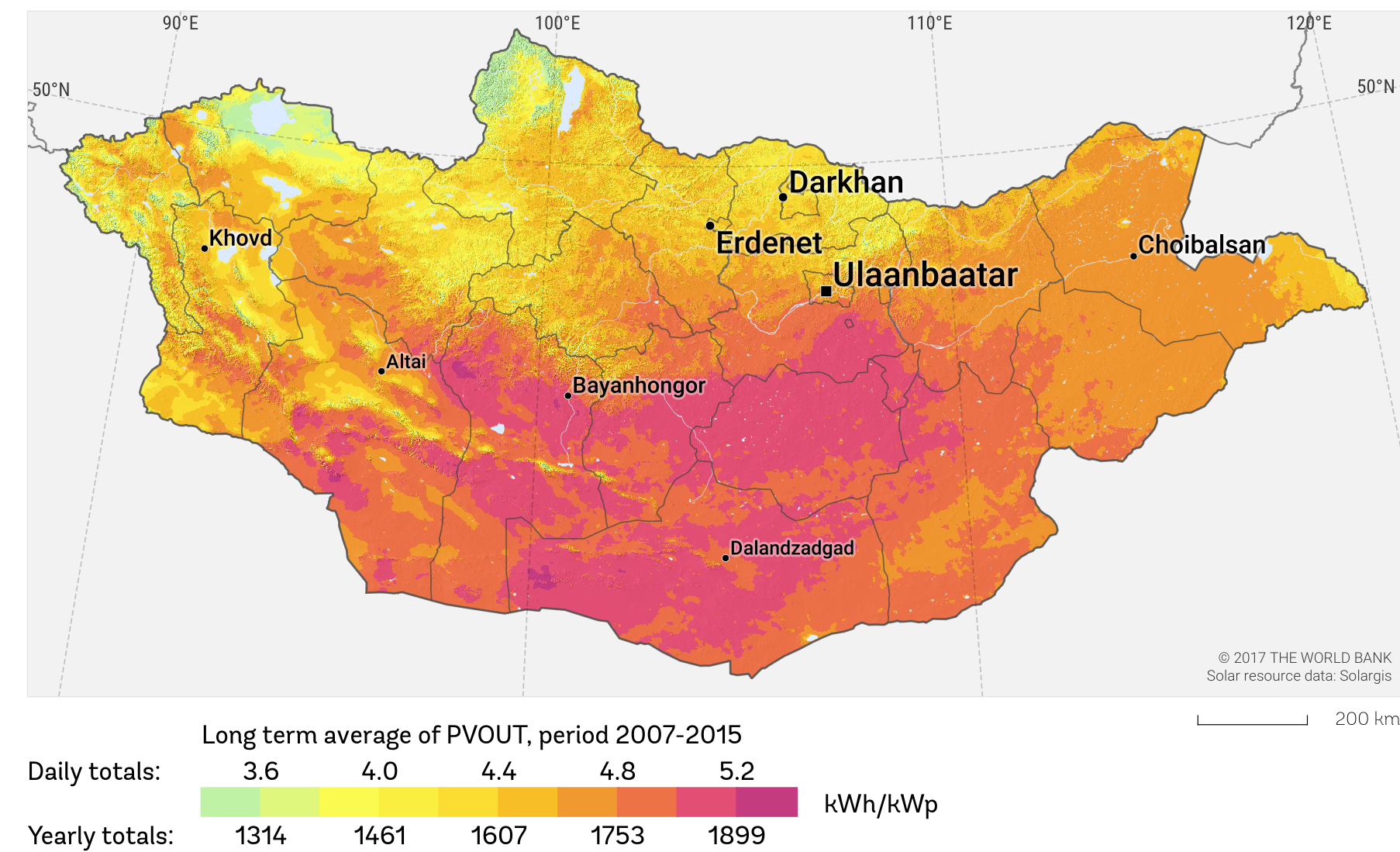 Solar power, often believed to be an uneconomical alternative to fossil fuels, has seen massive reductions in cost per kWh. According to a recently published report by the International Renewable Energy Association, photovoltaic (PV) panel prices have fallen by 90% since 2009, and continued technological advances are predicted to drive prices even lower. By current estimates, four-fifths of the solar PV project capacity due to be commissioned in 2020 will produce cheaper electricity than any coal, oil or natural gas option. This consistent trend towards affordability is clearly shown in the graph below, where average prices per kWh have fallen from $0.37 in 2010 to $0.09 in 2018. Crucially, these prices and the planned 2020 solar projects are competitive without any financial assistance.

Fig 2: Levelized Costs of Electricity for utility scale PV plants have fallen dramatically over the past 8 years and are now competitive with traditional fossil fuel energy sources.

While the falling costs of large scale PV have only recently caught the attention of Mongolia, this is not to say that Mongolia hasn't implemented PV before. In 1999, the country launched the National 100,000 Solar Ger Electrification Program which sought to bring electricity to nomadic herders through mobile PV arrays. By 2012, with help from the World Bank, over 67,000 solar home systems had been delivered to herder households across the country, successfully covering about half a million people or about two thirds of the nomad population. While solar has been very effective for families not connected to the central power grid, utility scale PV power was foreign to Mongolia until 2014 when the first grid connected plant was completed. While the plant only supplied one hundredth of a percent of Mongolia's total electricity demand, it was the vanguard for a wave of solar construction.

Fig 3: Major additions to solar generation occurred in 2017 and 2018, but PV panels still only represent 0.8% of total energy generation in Mongolia.

In 2016, Mongolia officially ratified the Paris Agreement and in doing so committed to supplying 20% of the country's energy supply through renewable sources by 2020 and increasing this to 30% by 2030. To achieve this, the country has approved construction licenses for 924 MW of renewable energy sources of which 247 MW is solar. Investment into solar has ballooned, spurred on by a power purchasing amendment to the 2007 Law on Renewable Energy. Today, installed PV generation is more than 100x larger than it was three years ago, due to the completion of the plants listed below.

Fig 4: Utility scale solar power plants are being constructed at an increasing rate.

To further incentivize construction of PV plants, Mongolia has implemented a system of Encouraging Tariffs and developed a guaranteed Power Purchasing Agreement to ensure that renewable energy is sold at favorable prices. With these tariffs, any price difference of electricity generated by a renewable source that is connected to a transmission network, shall be absorbed in selling prices of other generators connected to the transmission network. However, it is important to note that the Mongolian government also heavily subsidizes coal generated power to lessen the burden on consumers. Thus, the tariffs for renewables acts to somewhat even the playing field between brown and green energy sources.

While coal has defined much of Mongolia's current economy and energy generation, today the country is charting a new path. Mongolia's Constitutional commitment to environmentalism is stronger than ever, with its early adoption of the Paris Agreement and encouraging tariffs as tangible proof. As internal support for solar power grows and its price continues to descend, Mongolia is well positioned to capitalize on its massive potential. Indeed, in light of recent development, it seems that this process has already begun. In this frontier economy, not even the harsh winters can freeze the growth of this burgeoning industry; even in 40 below, the sun still shines. 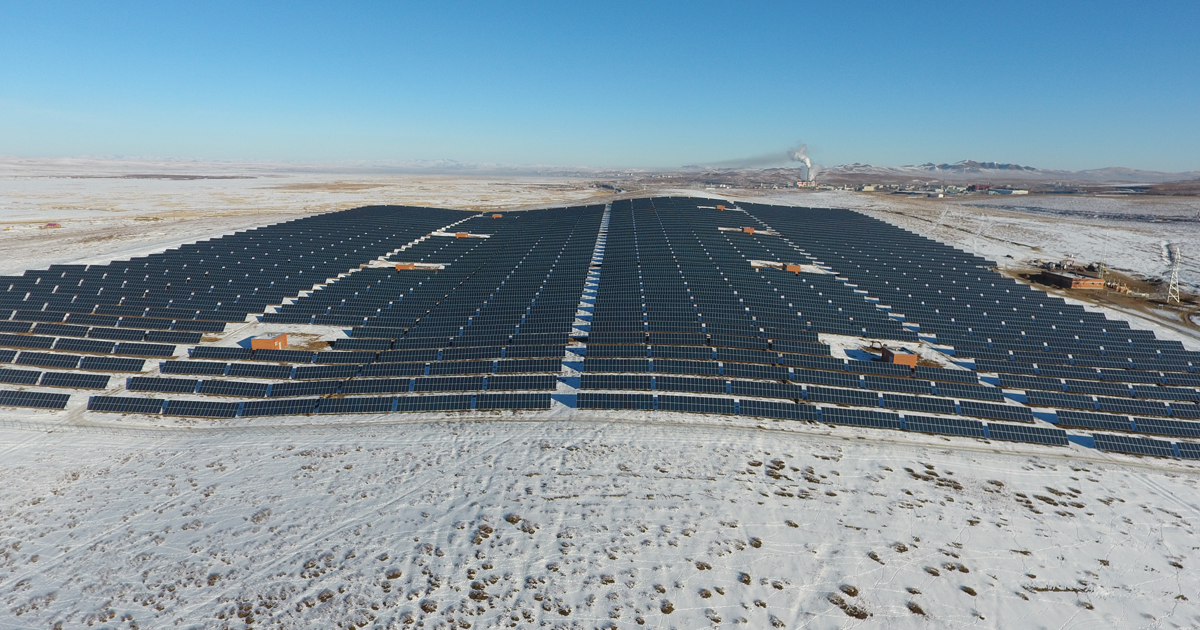 Fig 5: A recently completed solar power plant in the Khushig Valley is expected to reduce greenhouse gas emissions by 24,836 tons of CO2 per year.